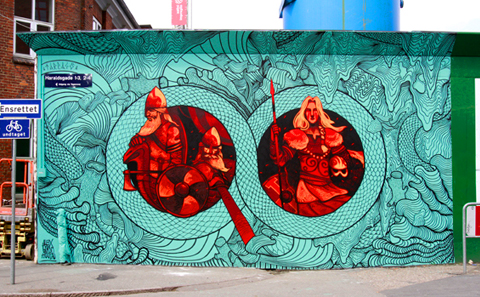 In mid 2016, Joan Tarragó and I created a collaborative project called Drakkar. We traveled to Copenhagen (Denmark) to be part of a muralism project that the city’s subway company has created to decorate its construction fences at various points of the city. This was the result.

The concept of Drakkar is based on two main features, the drakkar as the type of boat that provided the Scandinavian people to explore new regions throughout the known and the unknown world, the adventure, new knowledge, new sharing, cultural exchange, and the drakkar as on of the most iconic symbols of the Scandinavian imaginary that combines its religion, its symbology, its social background and its arts and crafts.

The wall is located in Skjolds Plads (“The square shields”) in a neighborhood where all the squares and streets have something to do with the Norse mythology. It is also a neighborhood of people with few resources and one of the districts with more immigration in the city.

Before traveling to Copenhagen to make the mural, Joan and I did a silkscreen print of the final design. Edition signed and numbered by the two on 300gr paper.