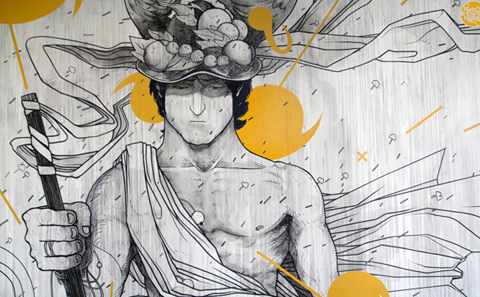 I have the honor to present, Mercurio, a mural project I made to paint the reception of the new HQ building of a very prestigious tech company in Madrid. 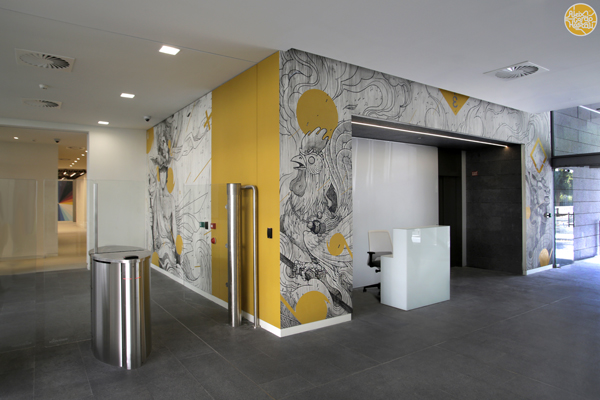 The concept of this mural intervention spins around the idea of the roman god of Mercury. Mercury himself comes from the greek original god Hermes, the messenger of the gods, the god of commerce, intermediary of all sorts of human relationships and transactions.

Searching among all the roman and greek symbology two main symbols arise with Mercury‘s representation, the rooster and the ox. The rooster is always depicted with Mercury‘s images as a symbol of punctuality and vigilance, needed in all commercial transactions led by the god, and the ox, that not only is the main character in the fable that allows Hermes to become the twelfth, and the last, god of the greek pantheon, but also as a symbol of fertility, good luck, hard work and loyal companionship.

The whole mural intervention tries to put into value through a mix of different classical western civilization’s iconography that, I think, fits the overall values that their brand represents on a daily basis all over the planet. In order to reach a wider range of mutual language between cultures and civilization and to make the whole work be understood by different people around the world, I added some personal touches of asian subtle details of my own that are present throughout all my personal work. 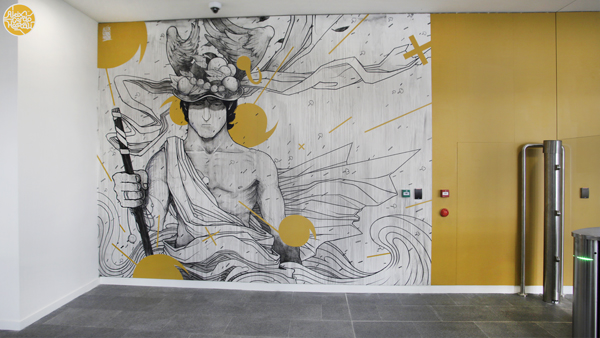 Mercury‘s personal representation in the hallway that leads to the main bar in the bulding. 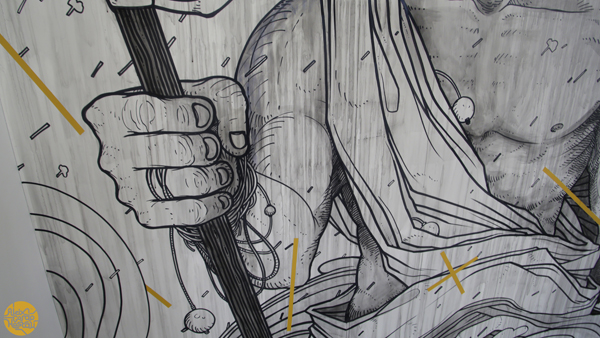 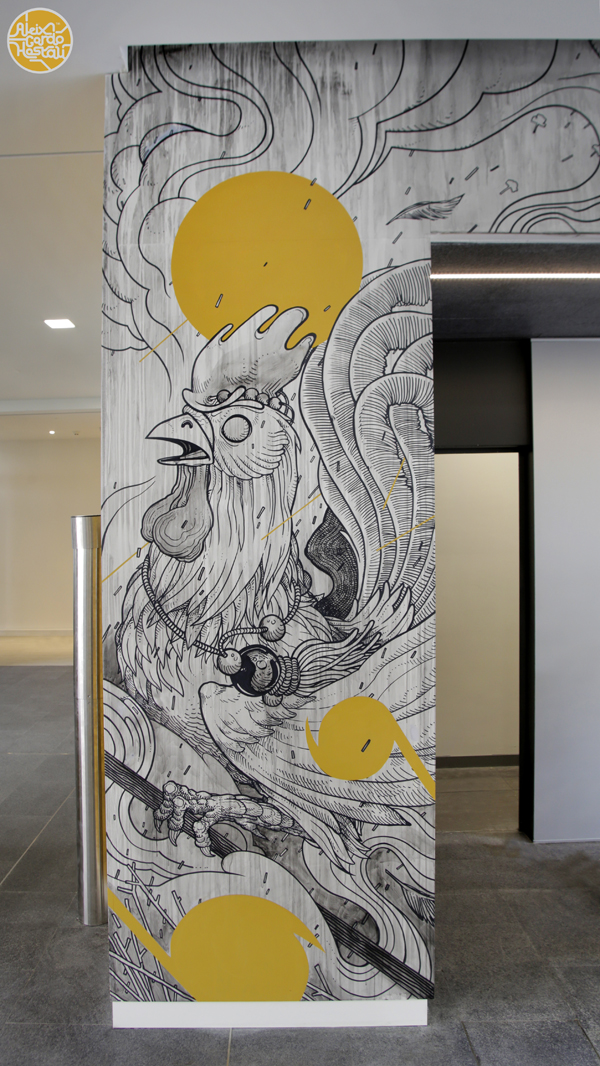 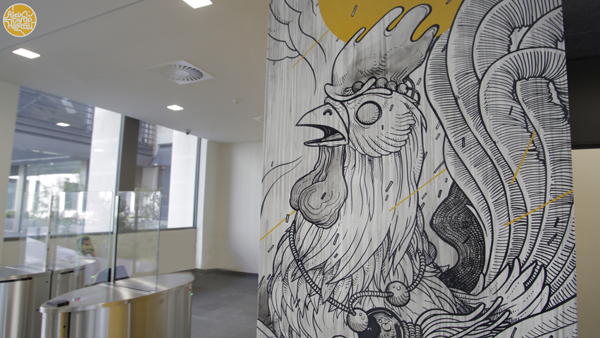 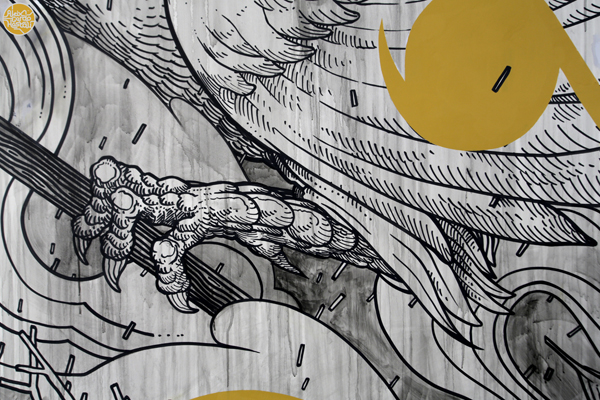 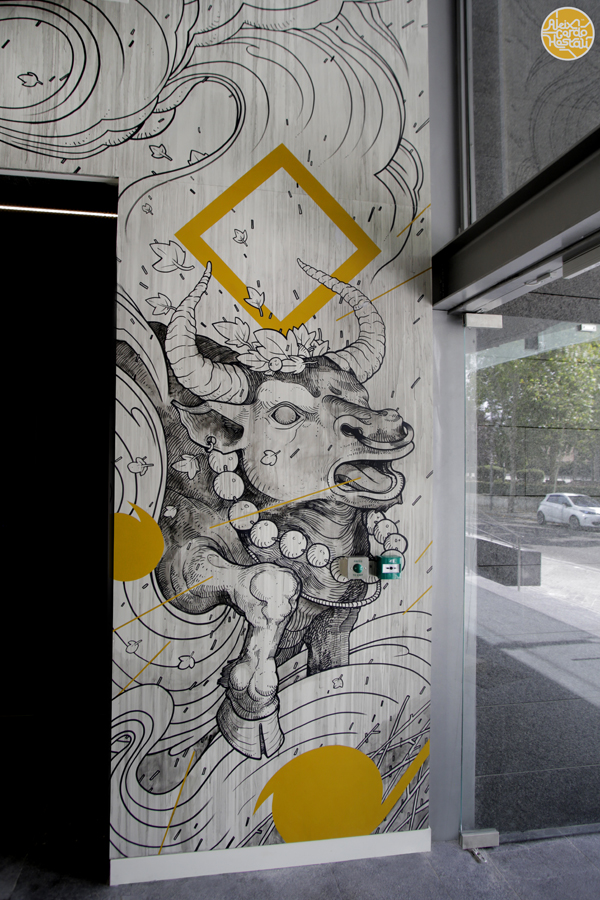 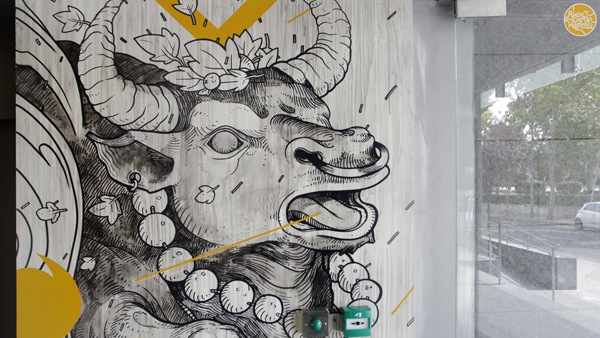 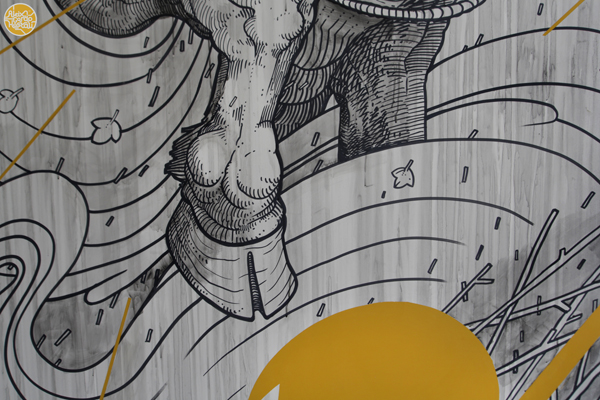 The alchemy symbol of wind, the natural medium of Mercury. 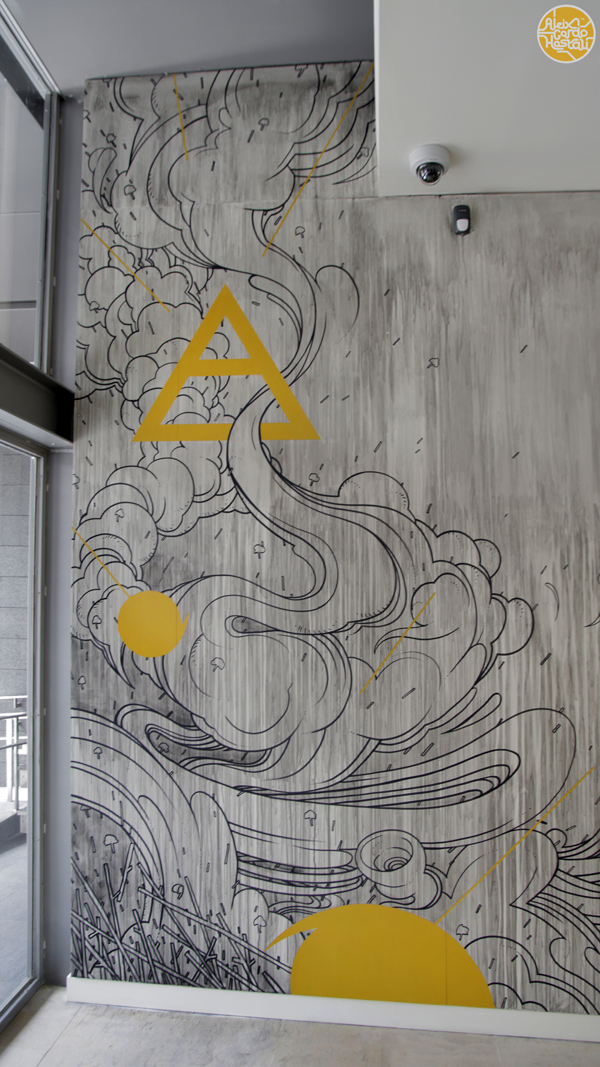 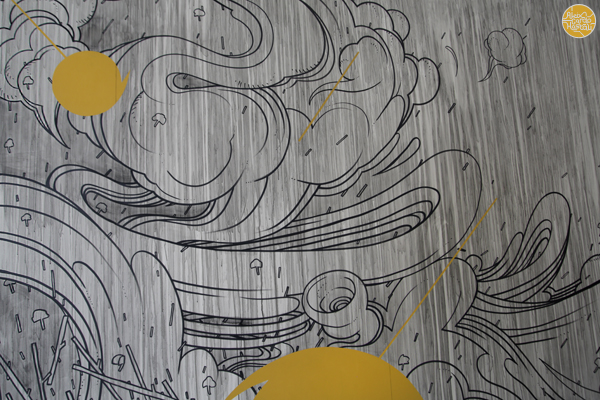 Process of background painting with black paint, a lot of water and a big brush. Not so many people realize that the background was painted with an irreplaceable organic touch, so no mistakes on top were allowed. Fortunately there were only a couple of minor ones during the making of the murals. 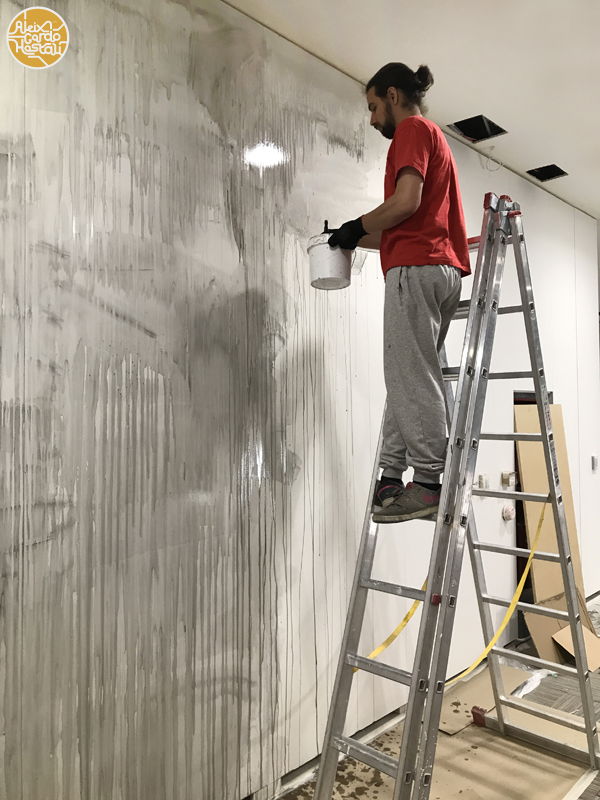 Here’s the original sketch done for the client. 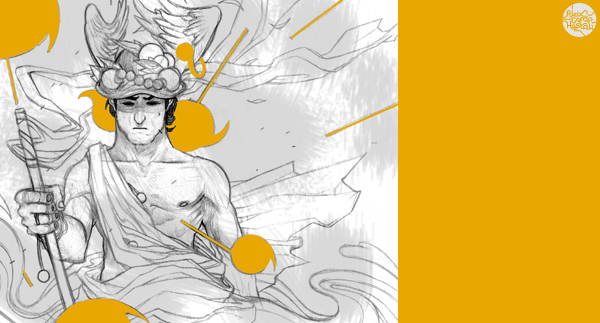 Here some details of the rest of the inside of the building: 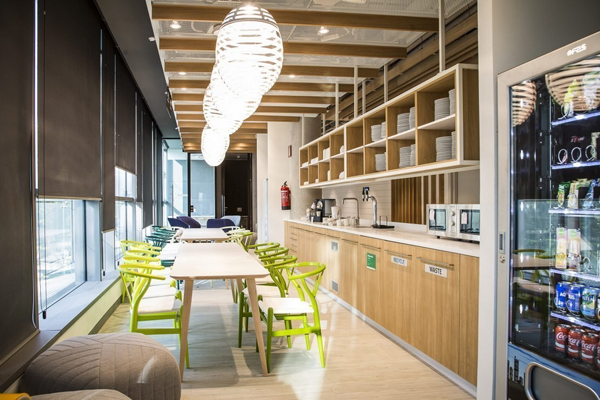 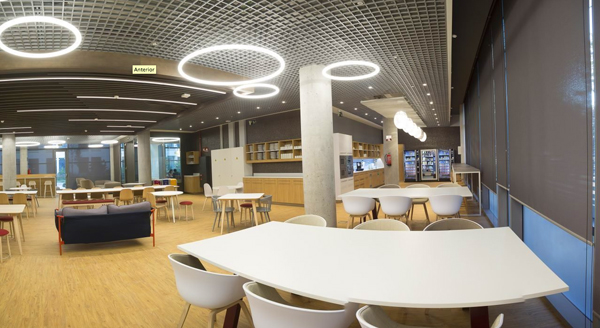 The rest of the building is decorated with murals from the well known artist, Felipe Pantone. 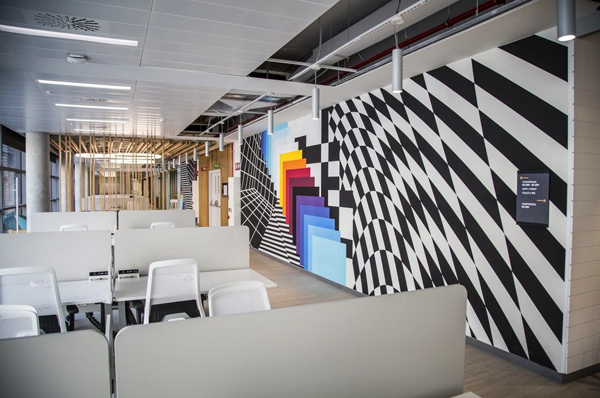 Exterior patio of the building. 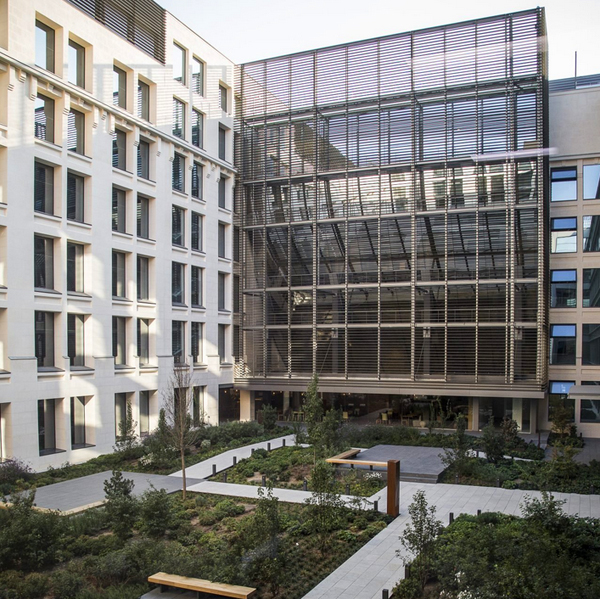 Bernabé, Paula, Jose, Pablo, Juan, Toni, Pedro, to all components of JLL and to Juan Alonzo. 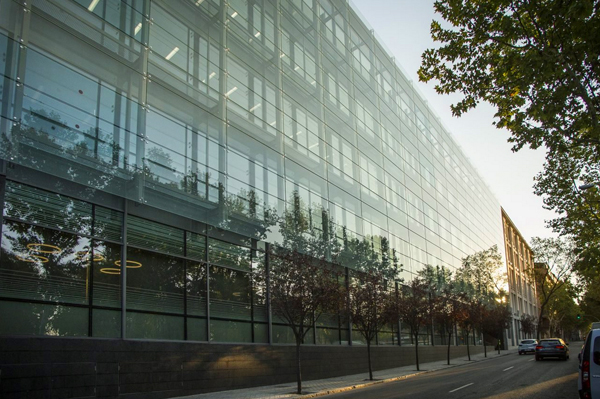