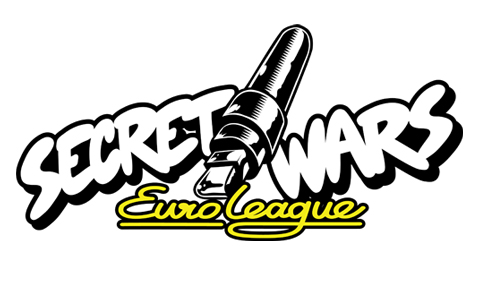 Posted by aleix in Event / Illustration / Live Painting / Mural / Street Art tagged with aleix / aleix gordo / art / arte / barcelona / casio / dave / dead / edding / euroleague / graffiti / hicks / inocuo / jose maria / monorex / mural / reebok / secret wars / southampton / street / terry guy / urbano On Sep 07 2016
Secret Wars, an artistic battle by groups between different European cities where the only rules are: each match lasts 90 minutes, only black paint on white background, without sketches or pencils.
Each city will be represented by a group of artists chosen by the event organizers. Each city will participate in a tournament by groups (who will travel to the rest of the cities of their group) to enter the qualifiers. The team who wins the Euro League will compete in Tokyo or NYC against the champions of Asia or the United States. In group 4, sharing the board with London, Suthampton, Dublin and Copenhagen, there’s Barcelona.
Thanks to the coach, I had the great honor to be part of the Barcelona team along with other artists like Dixon, Inocuo, Dave, Aryz and Tvboy. Our “field” in Barcelona will be the legendary Apolo. As the voting system will be arbitrated by a jury consisting of two judges and the public support (which is measured with a decibel reader).

Half of the team that represented Barcelona in the Secret Wars EuroLeague (Inocuo, Dave and myself) travelled to Southampton for the first battle!

The same team members travelled to Dublin to play against their team with a different strategy.