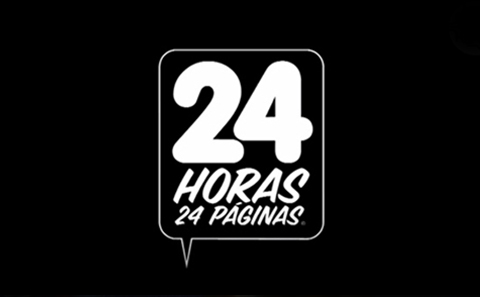 In August of 2009, Javi Ruiz and I made an experiment that was invented (circa 1990) by the famous cartoonist Scott Mccloud. The experimaent was to create a full comic of 24 pages in 24 hours. When I red the experiment in one of Scott’s books I thought about doing it myself alone, but then I said, “I will probably get very bored, locked alone for 24 hours!”, So I tried to convince someone else as crazy as me to join the experiment. Javi is an easily abducible person for these things, so he easily agreed. At the beginnign we thought to make one comic per person, but as Gustavo and David (two colleagues and audiovisual professionals) were interested in recording the entire experiment, we decided to create just one to make the recording more interesting. The intention was to record how we created, drew and colored a cartoon in real time and that was only possible if there were two people talking to each other to generate it all.
It was not just a great human and professional experience (I never thought I would use some methods and tools to create a comic!), but we recorded over 10 hours of footage that ended up being a documentary of 32 minutes.

Here is the cover design and two page samples of the comic.